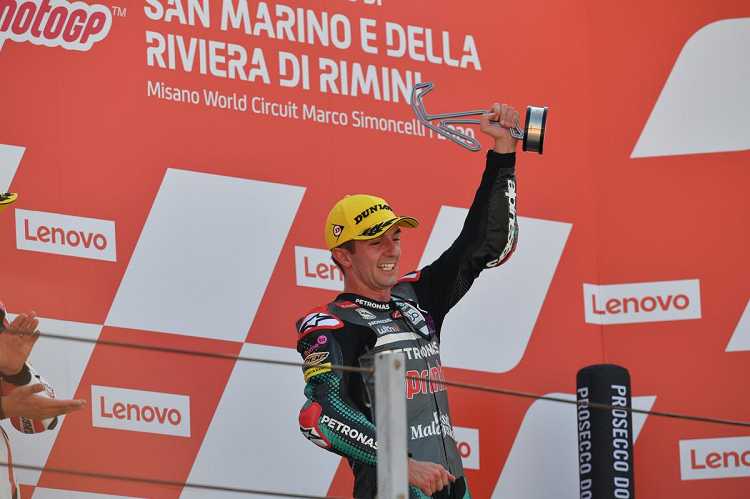 The Roger Bannister moment in MotoGP™

The Scotsman won in Misano and is third in the Championship riding the Petronas Sprinta Racing Honda. John’s home in Oban on the West Coast is how most people picture Scotland. Majestic mountains, Caribbean blue sea when the sun shines, beautiful Islands, Atlantic winter storms and midges come to mind rather than Grand Prix motorcycle racing.

While Scotland has produced plenty of motorsport World Champions two wheels have not been so productive but those who have tasted success at the highest level are very special. Three, Bob McIntyre, Jimmy Guthrie and Jock Taylor have worn the kilt with pride.

It was June 7, 1957 when McIntyre produced the magic Roger Bannister moment of Grand Prix motorcycle racing in the Isle of Man. Who will forget that moment in my home City of Oxford three years earlier when the athletic track announcer read out Bannister’s time for the one-mile race he had just won. Three minutes and the rest was drowned out by the cheers of the crowd. The very first man to run a mile in under four minutes and that announcement was soon relayed round the World.

Three years on and The Isle of Man was buzzing in anticipation at the start of the eight lap Senior TT race round the 60.721 kms TT Mountain circuit on the Island that had staged that very first World Championship race eight years earlier. Fourteen thousand extra fans arrived by ferry that very morning on the already packed Island to witness the Scotsman riding the four-cylinder Gilera in action. They knew history was about to be made. Nobody had lapped the most demanding and dangerous racetrack in the World at over 100 mph (160.934 kph). It was the Golden Jubilee of the TT races and McIntyre celebrated in true style.

At the end of the second lap the announcement boomed out round the circuit.’ Bob McIntyre leads the Senior TT after a second lap at an average of 101… The rest was drowned out by the cheers. The first rider to lap the Mountain circuit at over 100 mph in a time of 22m23.2s.

Typically, he completed three more 100 mph laps to win the race in three hours 2.57s. The modest Scotsman had already won the 350cc TT race that week and won the 350cc race for Gilera at Monza later in the year. He finished runner-up to team-mate Libero Liberati in the 500cc World Championship. McIntyre went on to win two more Grands Prix bringing Honda 250cc success in the 1961 Ulster and a year later at Spa Francorchamps. Tragically he was killed that same year in a crash at Oulton Park in England.

Twelve years before the World Championship started on August 8, 1937, 40-year-old Jimmy Guthrie was leading the German Grand Prix on the Sachsenring road circuit.

The Norton rider was chasing his third successive victory in Germany, where the rumble of war was looming fast. He had already won 19 Grands Prix, but he crashed in the woods on that fateful last lap and died in hospital. Four years after the Second World War ended in 1949 the locals built a memorial to Guthrie where he had crashed. They had never forgotten that Scottish gentleman and a fresh bunch of flowers have been placed on the memorial every week for the last 71 years. Back in the Isle of Man a kiln of stones on the mountain climb out of Ramsey on the TT course is lovingly preserved in memorial of the 19 times Grand Prix and six times TT winner.

Scotland’s only Grand Prix World Championship came on three wheels. My dear friend Jock Taylor with Swedish passenger Benga Johannson captured the 1980 Sidecar World Championship at the British Grand Prix at Silverstone. On a truly awful August day in 1982 Jock lost his life in the pouring rain racing over the railway lines at Imatra in Finland when he crashed striving to win back the t**le that meant so much to him and his country.

Other Scotsman have come close to Grand Prix wins. The nearest was Niall Mackenzie with seven third places and a pole position in the 500cc Championship. His partner in the Silverstone/Armstrong team Donnie McLeod was a top class 250 and 350cc rider while Steve Hislop was a superb Superbike and TT rider.

Can John McPhee go one better than any of them and win a World t**le on two wheels? It is a mighty big ask but they would certainly approve of his efforts on behalf of their proud and patriotic country.