Anyone have a spare/unwanted/no longer used chain adjusting tool for an rc36 1995 vfr 750. Have chain and sprockets ordered but wouldn’t mind tightening it up while im waiting and having one handy for obvious reasons 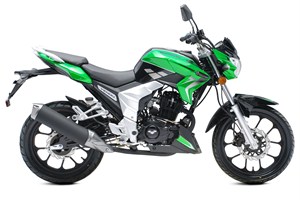 CHINESE brand Lexmoto has added several new models to its range including a 125 naked bike with an MP3 player and speakers.

The Venom 125 has an MP3 player built in to the petrol tank which can play music from a MicroSD card through speakers in the side panels.

Lexmoto has produced this video demonstrating how to use the hi-fi and this one showing it in action on the move.

The full range is here.

The release said of the Venom: ‘This is the fastest selling model that we’ve ever had! The 125cc Learner legal features a 4 stroke SOHC engine capable of producing 8.5kW. The bike is complimented with a front and rear disc brake setup with telescopic forks on the front and an mono rear shock on the rear. The model has been developed by our supplier as a unique design and has been the first motorcycle to ever be awarded the Canton design award. The model includes a digital dash and as an additional novelty an MP3 player integrated into the Petrol tank which outputs audio from a USB or MicroSD card via speakers that are integrated into the side fairings. Available in Black and Green or Blue and White this bike is anticipated to be a big seller this year.’

Hey lads
Just wondering if anybody else had issue with the condition of the track and garages yesterday?
For €185, I sure didn’t expect to have to sweep a load of broken glass and other s*** from the garage that was presented to us. I like mondello, I think it’s a great little track but for the money involved now in trackdays or racing, I think the standard there needs to improve.
An occasional sweep of the paddock wouldn’t go astray either and some of the lads I was talking to were complaining about the condition of the track, dirt etc though I didn’t notice that.

got for sell top and and bottom JEFFERSON tool drawer . 550e for set :
6 Drawer Tool Chest (Top) model no JEFTB105

You can check description and store price under that link http://www.efox.ie/shop_item.php?sec…Tool%20Storage

Alastair Seeley’s third place in the Pirelli National 1000cc Superstock class was the stand out performance for Tyco BMW during today’s opening round of the 2015 season at Donington Park. Although huge credit must be given to his British Superbike team-mates Michael Laverty and Tommy Bridewell – who secured four top ten finishes between them on the all-new BMW Motorrad     S 1000 RR.

“I am very satisfied with our day’s work at Donington Park. The whole Tyco BMW team pulled together following a tough practice and qualifying, and following a late night they delivered me a revised electronic and throttle strategy for morning warm up.

“I rode my first lap out of the pits with a smile on my face as I knew the team, with the help of the BMW Motorrad guys, had cracked it; a superb effort all round.

“Race two was excellent: I finished the race 8.7 seconds off the win, but I was 8.7sec down after six laps, so I lost nothing on the front guys whilst scrapping my way through the field. I’m excited to see what we can do once the team really get their teeth into the BMW S 1000 RR before round two at Brands Hatch.”

Tommy Bridwell said after his sixth and eighth place finishes:

“We got ourselves out of a bit of a hole in both races. Obviously race one was a little bit stronger, but at least we know where we are going wrong now. We have to take the positives away from the weekend: we qualified 17th but came away with a sixth and an eighth and we have time to improve things even further for the next round.”

“It all felt like being back in Supersport again, we had such a big battle with Hudson and Josh. I got a great start on the Tyco BMW S 1000 RR but as you expect in this class there was plenty of hard racing. I led onto the last lap and my plan was to ride defensive but Hudson came past at McLean’s, which was a bit of a surprise, but we didn’t panic.

Unfortunately we had a little hiccup with the bike on the last lap, as it starting surging a little and it probably cost me the win at the end, but I’m not going to complain. We’ve made massive progress since the first test and there’s plenty to come from both myself and the bike, so I can’t be disappointed with a podium in my first race.

“Looking back at our first official BSB weekend as Tyco BMW, we are determined to take the positives from the experience and use what we learned to help us progress for round two at Brands Hatch.

“It’s fair to say this was a difficult weekend and perhaps that was inevitable as we still have so much to learn about our new BMW Motorrad S 1000 RR machines. However, we have an experienced hard working crew and great support from BMW, so I am confident each of our riders will be challenging at the sharp end sooner rather than later.

“Thanks to everyone involved for their efforts in getting us to this point and to each of our riders for their contribution over the weekend. Michael and Tommy both worked extremely hard to fight through the pack from lower start positions, and both showed determination in progressing to solid finishes in both race one and two.

“Alastair Seeley was a little unlucky not to challenge for the race win in Superstock class after we suffered some fuel surge on the final lap. However, he rode a fantastic race and will only get stronger as the season progresses, and I think two S 1000 RR machines on the podium shows the potential of the package.”

Heading to wales on the boat.

Great day for it.

Byrne Wins And Easton On Podium For PBM At Donington Park

Sittingbourne rider Byrne, aiming for his fifth MCE BSB t**le, qualified third for today’s first 20-lap race and despite still suffering from a hand injury sustained in pre-season testing, was immediately locked in a battle for the lead with fellow Kawasaki rider James Ellison. With a difference in tyre strategies, Shakey hoped his harder rear tyre would come into force in the second half of the race but Ellison was able to hold on meaning Byrne had to settle for a close runner-up spot.

Scotsman Easton, from Hawick, was showing well in race one and challenging in the leading bunch but started to suffer from arm pump in the second half of the race and when he hit a false neutral going into the Old Hairpin, he ran wide and dropped down the order before clawing his way back to 11th at the chequered flag.

Race two saw the PBM Kawasaki pairing run inside the top three throughout the race and with Honda’s Dan Linfoot also in the mix, a terrific three-way battle ensued. It was nip and tuck all the way with Byrne and Linfoot constantly changing positions but on the 18th lap, Byrne finally made his move count and he was able to take his 62nd career race win. Easton crossed the line close behind in third meaning the duo already occupy first and sixth in the championship table.

It was the third time the Penrith-based PBM team have scored a double BSB podium following Byrne and Easton claiming first and third at Oulton Park in 2012 and Byrne following Tom Sykes home in second and third at Donington Park back in 2007.

Meanwhile, third team member Ian Hutchinson was gaining valuable track time prior to the International road race season and the Yorkshireman from Bingley enjoyed a solid weekend where he was rewarded with 18th and 20th from the two races.

“I’m made up with how the weekend’s gone given how I launched myself into orbit back in Spain. I’ve done everything possible to be on the grid but my fitness isn’t where I want it to be. The bike is very much work in progress too, particularly with the balance, and the team have been working hard all winter to improve it. We opted for the harder tyre and with the increase in track temperature, the bike was the best it had been all weekend. To start the season with a first and a second is brilliant and fair play to the whole PBM Kawasaki Team, they’ve done a great job.”

“I’m really happy to end the weekend with a podium as the first race was a bit of a disaster. I started to suffer with a little arm pump and I simply couldn’t pull the clutch in. It meant I hit a false neutral going into the Old Hairpin and it cost me the chance of a good result but third in the second race was a good way to finish. I was still struggling a bit and whilst I could run the pace of Shakey and Dan, I couldn’t really challenge them but I’m more than pleased to start the season with a podium.”

“I’m really pleased with how the weekend’s gone and to get so much mileage under my belt is great preparation for the Isle of Man TT. I’ve gone quicker than I’ve gone before here and was running in the company of some established BSB front runners so it’s been very positive.”

“It’s been a brilliant weekend for the team and I’m chuffed to bits with all three riders. The cream always rises to the top and Shakey’s proved that again today even though he was struggling a bit with a bicep injury which we think may need a trip to a specialist for an MRI scan. To end up with a first and a second is unbelievable and a great start to the season for us. Stuart also rode brilliantly and I’m delighted he got onto the podium in the second race as it was the least he deserved. His two results don’t really do him justice this weekend but we know he’s going to be up there all year so we can’t wait for the next round. Hutchy rode well all weekend too, putting in some strong, consistent lap times and it’s great preparation for him and the team for when we get to the North West 200 and TT. We’ll certainly be in a strong position.”

Championship Points (after round one)

Source: Byrne Wins And Easton On Podium For PBM At Donington Park